Should dogs be allowed to run free in cemeteries, or are graveyards no place for a dog park? 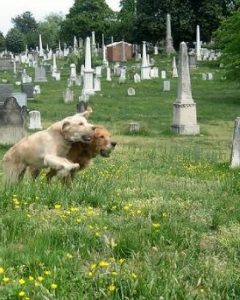 In July the city of Concord, N.H., banned dogs from cemeteries, and 61 percent of readers polled by USA Today agreed it was the right decision.

We don’t want dogs pooping in our cemeteries is really what this boils down to, Concord Councilor Keith Nyhan said after the city councils decision, according to the Concord Monitor.

Farther south, in Washington, D.C., leashed dogs with wireless dog fences are allowed in the Historical Congressional Cemetery on Capitol Hill – as long as their pet parents are paying members of its Dogwalking Program. In 1997 this final resting place of John Quincy Adams, John Philip Sousa and J. Edgar Hoover, among 55,000 others, was listed as one of The National Trust for Historic Preservation’s most endangered historic places due to its neglect, vandalism and theft.

While a $2 million congressional endowment allowed the cemetery to be repaired and spruced up, the Dogwalking Program is credited for providing the funds to keep the grounds continually maintained. According to Obit Magazine, members pay $125 in annual dues, plus $40 per dog. There is currently a waiting list to become one of the 450 members. The program raises about $85,000 each year, which is about a third of the cemetery’s operating income.

Across the country in Ventura, Calif., many veterans are not pleased that Memorial Park, a former cemetery with 3,000 graves, has been turned into a dog 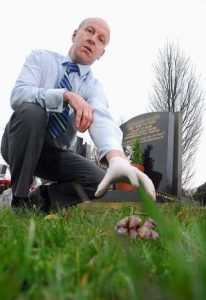 park. Among those buried there is 1860s Army hero Pvt. James Sumner, who was awarded the Medal of Honor for helping to rescue a child kidnapped by Apache Indians. In 1912, he was buried in what was then called St. Mary’s Cemetery.

Talk to any veteran, he will tell you it is a terrible thing. Its disrespectful, retired Marine Sgt. Craig Gunny Donor told the Ventura County Star. Donor, who served two tours in Vietnam, wants Summers grave removed from the park.

Dog lovers disagree with Donor, insisting that they are respectful and clean up after their pets. The people who use the park are the most reverent, in my opinion, said Beverly Karbum, who was walking her Australian Shepherd. “Sometimes, people will come up and pick up my dogs poop before I have a chance.

City officials agree with the dog lovers, and want Summers final resting place to stay final. We are treating him pretty darn well, except for the poop, Parks and Recreation Commissioner Sharon Troll said.

This post was last updated on: Friday, July 23, 2021
SaveSavedRemoved 0
Previous

On the Road With Your Pooch: Car Travel Risks and Safety

Preparing to Fly With Your Dog

This is Dianne Simons, and this is a short description of me. I am an author at ilovedofriendly.com, pet veterinarian and dog afficionado. I publish regular posts regarding dog related health topics as i have spent my whole life exercising it. My passion for our beloved companions go beyond this website as i run my own verinary center in Idaho

How to Treat Your Dog’s Tonsillitis

How To Help Your Obese Dog Get In Shape