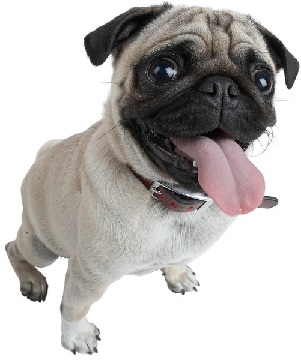 The summer sun may be perfect for dogs to bask in, but it can cause health risks for our canine friends – especially pug-nosed (brachycephalic) dogs.

Brachycephalic means having a shortened head, according to the website of Mar Vista Animal Medical Center in Los Angeles. The dogs were bred to have a normal-sized lower jaw and compressed upper jaw. Breeds such as English Bulldogs, Pugs, Pekinese, and Boxers are brachycephalic.

The shortened upper jaws can result in narrowed nostrils or windpipes, larynx problems and elongated soft palates that flap loosely into the throat. These physical features make it harder for the brachycephalic dog to pant, especially in warm weather.

Dogs with longer faces and throats can pass air quickly over their tongue through panting, according to Mar Vista veterinarians. Blood circulating through the tongue is cooled as saliva evaporates and the cooled blood flows to the rest of the body.

Brachycephalic dogs pant harder to move the same amount of air, which can cause airways to become inflamed and lead to further overheating.

Dogs don’t possess the same sweat glands as humans do. Instead they have some sweat glands on the bottoms of their paws, according to Boxer Rescue L.A. The combination of the shortened head and fewer sweat glands can make Boxers overheat in weather that might not be too hot for another dog. 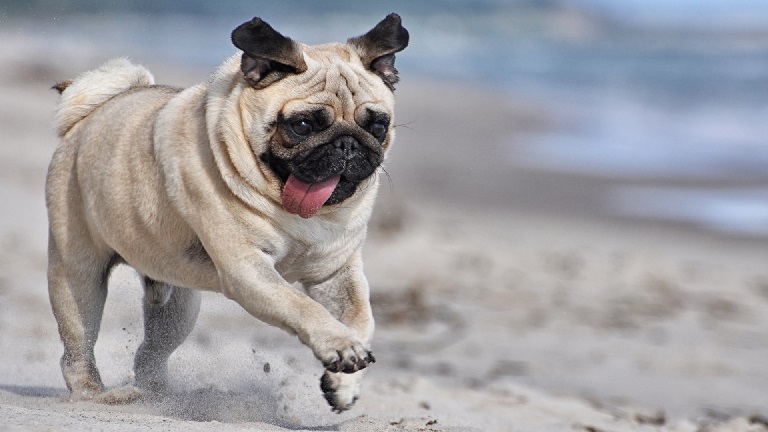 Temperatures above 80 to 85 degrees can be dangerous for Pugs, according to PugVillage. The heat can also cause long-term damage to Pugs’ organs, including the heart, kidney and liver.

Because of this, Pug owners should make sure their dogs don’t stay outside for more than 10 to 15 minutes at a time during warm weather. If a Pug pants persistently and heavily, then the dog may be overheating. Owners should feed the dog and cool him with cold water. Pug owners can prevent overexposure by keeping their dogs in an air-conditioned room.

Boxers, like other dogs, should never be left unattended in a vehicle or a backyard that lacks water and shade. Owners should provide the dog with lots of drinking water and a dark, quiet place with a fan or cool mat to lie on. The dogs also like to beat the heat by dipping into a child’s wading pool, according to Boxer Rescue L.A.

Boxer lovers can wrap a damp towel or “wet coat” around their pets. They can air-condition their dogs’ quarters by freezing water in 1- or 2-liter plastic bottles and placing them in a crate or small room the Boxers are in. As the ice melts, it cools the air and provides more drinking water. Splashing water on the dog’s paws, ears, private parts and stomach will also help cool him down. 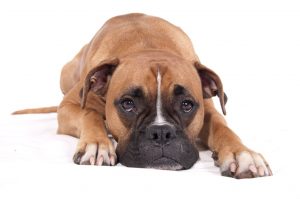 If a Boxer is suffering heat stress, his sides will heave, he’ll pant rapidly and have a tight look around his eyes. The dog may furiously dig to get to cool dirt, or shove his head in his water dish then toss water over his back. An overheated Boxer may have pink ears and gums, and his white areas will turn very red. The dog may also become uncoordinated due to depleted electrolytes.

When Boxers show these symptoms, owners must seek immediate medical care and cool them down with cold water or place ice packs on the dog’s chest and underbody. If the dog is still conscious, give him water to drink or trickle fluid down his throat if he’s panting too hard. Children’s’ Pedialyte can work in an emergency, but never Gatorade because the sweetener in it is bad for dogs and can cause their stomachs to cramp.