Simply stated, anemia means the body has experienced a loss of red blood cells or hemoglobin or both. (In ancient Greek anemia means “lack of blood.”) The causes of anemia in dogs are numerous and the condition signifies an underlying, usually larger, problem. In fact, anemia isn’t a disease in and of itself, but rather a symptom of something else going on in the body.

Fortunately, there are a number of warning signs that pet parents can keep a lookout for to determine if their dogs may have become anemic. When people spot these signs in their dogs they can take their dogs to the veterinarian for an examination. But even looking for signs is not completely foolproof. Dogs may show several symptoms, just show one or, in some cases, none at all.

Here’s a look at some of the indications that a pooch may have anemia:

Checking a dog for anemia has two capacities. First, the doctor must determine if indeed the dog has anemia. After a physical examination and reviewing your dog’s medical history, the doctor will probably take a blood count and urinalysis. Commonly, doctors will perform what is called a packed cell volume (PCV) or hematocrit test, in which a blood sample is “spun in a centrifuge to separate the red blood cells from the plasma (the liquid part of the blood). Between 35 – 55 percent of the dog’s blood should be red blood cells. If the hematocrit is lower than 35, the dog is anemic,” reports Dog-health-guide.org. The doctor might also run a red blood cell count and a hemoglobin count, and possibly take a sample of bone marrow, which produces most of the body’s red and white blood cells and platelets. 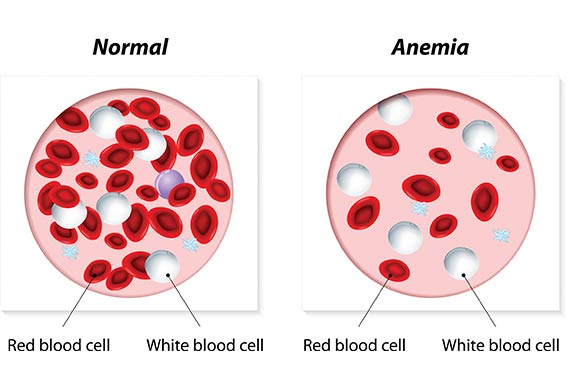 Once the doctor has determined your dog has anemia, the veterinarian will run detailed tests to determine what’s causing the blood loss. This can be anything from testing urine samples to look for organ function and fecal samples to look for parasites, to more sophisticated tests. A bone marrow biopsy will determine whether or not a dog has leukemia and blood work can look for “increased numbers of immature red blood cells, which means that the bone marrow is responding to the need for more blood and making more red blood cells. Tests also include checking the blood for parasites that might be destroying red blood cells,” says Dog-health-guide.org.

Treating your dog’s anemia depends on the severity and whatever is causing it, which can be any number of things: 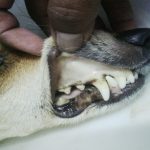 It might be important to note that in humans, iron deficiency is a common cause of anemia, especially in cases involving women. In dogs, however, poor iron is a much less frequent reason, although it’s not entirely impossible. It’s most likely to turn in up in cases in which dogs suffer from malnutrition and hookworms, says Natural-dog-health-remedies.com. It is far more probable that one of the other possibilities has caused a dog’s red blood cell loss.

Unlike so many other illnesses or conditions, anemia doesn’t reveal itself in certain breeds more often. According to the Pet Place website, because of the many types and causes of anemia, “there is no gender or age predisposition for anemia. Individual disease processes may be more common in certain age groups and breeds, so it is important to characterize the type of anemia present.”

The treatment of anemia depends on the underlying cause. For instance, if a dog has suffered blood loss, causing a severe case of anemia to the point that his life is in jeopardy, a blood transfusion might be in order. Although that’s usually the exception rather than the rule. More commonly, the veterinarian will prescribe the proper medication or care to treat the underlying cause.

First and foremost, pet parents need to administer the medication according the doctor’s instructions for optimum results. Doctors may also prescribe additional treatments and medications to go along with the diagnosis for whatever is causing the anemia in the first place.

At home, pet parents can easily monitor their dogs for symptoms of the original illness. Check their gums, keep track of eating habits, watch breathing and make a note of any signs of lethargy or illness. If you’re not sure how to do this, ask your vet for help so you can read any signs of symptoms.

In addition, while pet parents are following their veterinarians’ advice, they can supplement dogs’ treatment with proper nutrition and vitamins. Your veterinarian can help determine which diets and supplements work best for the safest and most effective approach in your dog’s individual case.

It’s also best to let your dog fully recover from any and all ailments by avoiding too much exercise and letting him rest. Work closely with your veterinarian as your dog heals and begins the process of going off his medication when that time comes. Proper treatment, medication, and care can help a dog’s recovery immensely.