How to treat your dog’s mange 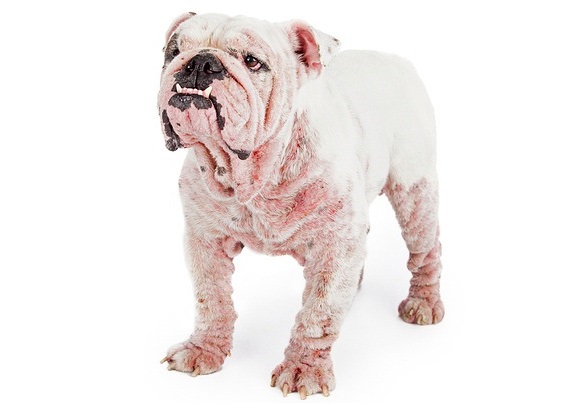 It’s kind of the ultimate insult for a dog: mangy mutt. We all know what a mutt is, but what, exactly, is mange anyway? Actually, there are three types of mange—sarcoptic, demodectic and cheyletiella—and they occur when microscopic mites invade a dog’s skin. Mange is a disease in which mites attack in large numbers and reproduce massively on dogs’ skin, writes Mange-in-dogs.

Mange can be generalized, meaning a dog’s entire body is infected, or localized, which means that the mites are concentrated in specific areas. Generally, that occurs in the areas of the body that have little to no hair, such as the ears, belly, elbows, armpits, and feet.

Mange is a serious disease, which can lead to other health conditions and even death in some instances. Although infections can range in degrees of severity, it’s best to get all dogs showing signs of the disease to the veterinarian to clear everything up as soon as possible. Symptoms of mange can vary, but generally include the following:

It can be difficult sometimes to tell the difference between a dog’s scratching because of mange or another condition, such as allergies. A dog occasionally scratching himself is normal, but if he’s doing so excessively then he has a problem that a veterinarian needs to look at. Also, as a dog continues to scratch, the mites begin spreading to different body parts. The itching appears to worsen in warm conditions, such as indoors, or near heating sources, such as a vent or stove, reports Pet education.

Mites burrow under a dog’s skin or crawl around underneath the hair and, consequently, those areas experience hair loss. Examine spots of baldness or thinning hair for signs of red blisters and sores, Mange-in-dogs recommends.

Sores, red pustules and yellow crust can develop on an infected dog’s skin, writes Pet education. “Because of the severe itching and resultant scratching, the skin soon becomes traumatized and a variety of sores and infections can develop as a result,” the site continues.

As the mites increase in a dog’s body, the odor of his body will begin to change, reports Mange-in-dogs. It’s similar in scent to strong cheese or athlete’s foot. 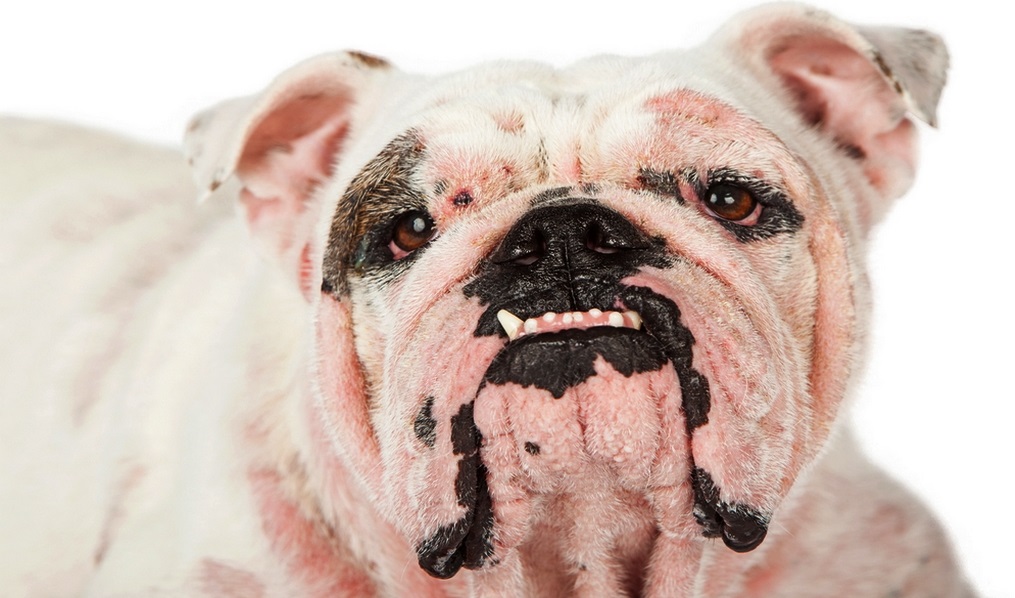 Once a pet parent has noticed signs of the disease and taken his or her pooch to the vet, the doctor will need to perform a physical examination and what’s called a scraping. It’s what it sounds like: The veterinarian will scrape a dog’s skin and examine the sample under a microscope to look for mites. However, this process is not always an accurate way to determine if a dog is suffering from mange. The vet may choose to treat the symptoms of mange to see if they disappear.

Whether or not a dog is positively infected with mange or whether it’s just a possibility, they need to stay isolated from other animals. Mange is highly contagious and can easily spread, including to humans sometimes. In addition to the scraping, your veterinarian may conduct blood work because “certain mites can penetrate the blood,” writes Mange-in-dogs. “Because the blood of the dog suffering from mites may have altered, veterinarians will need samples for further analysis. Blood samples may also reveal what type of mites have infested your pet and how they can be flushed out. The types of antibiotics to use may also depend on the results of the blood sample.”

To make matters a little confusing, like mentioned above, there are three types of mange. Treatment can depend on which type of mange a dog has. Let’s take a look at the different varieties and how to approach each one.

Sarcoptic mange is caused by sarcoptic mites, or Sarcoptes scabiei. Also known as canine scabies, this condition can affect all ages and breeds of dogs, reports Peteducation.com, and can easily spread to other hosts, including cats, ferrets, and humans.

The lifecycle of these mites is short, up to about 22 days in the right environment, but they can cause a lot of damage in that time. The female burrows into the skin “and lays eggs several times as she continues burrowing. These tunnels can actually reach the length of several centimeters. After she deposits the eggs, the female mite dies. In 3-8 days, the eggs hatch into larvae, which have 6 legs,” reports Pet Education. When the dog scratches himself, the tunnels break open and the mites die, although the itch persists because of the toxins in the skin, according to Mar Vista Animal Hospital. 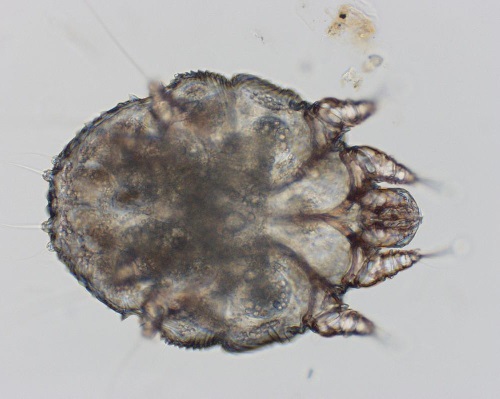 There are several ways to treat scabies, including bathing the dog in a medicated shampoo and then applying a organophosphate dip. However, things are more complicated than just a typical bath in these situations. “Dogs are usually dipped once every two weeks for two to three times,” reports Pet Education. “While effective, these dips are very unpleasant to apply for both the owner and the dog. Because the dip must come in contact with the mites and many mites live on the face and ears of dogs, great care must be exercised with applying these dips to these sensitive areas. The dips can be toxic to humans and are not suitable for very young, old, or debilitated animals. In addition, there are some reported cases of resistance to these dips in some cases of sarcoptic mange.”

Don’t be afraid to ask your veterinarian if the office offers such a service and, if not they can recommend someone if you feel like you’re not up to the task yourself. Furthermore, your veterinarian will likely prescribe some medication for your dog to take. Follow your veterinarian’s instructions to the letter and remember to practice proper hygiene, including fresh, clean bedding and washing whatever your dog comes in contact with to prevent the mites from spreading. 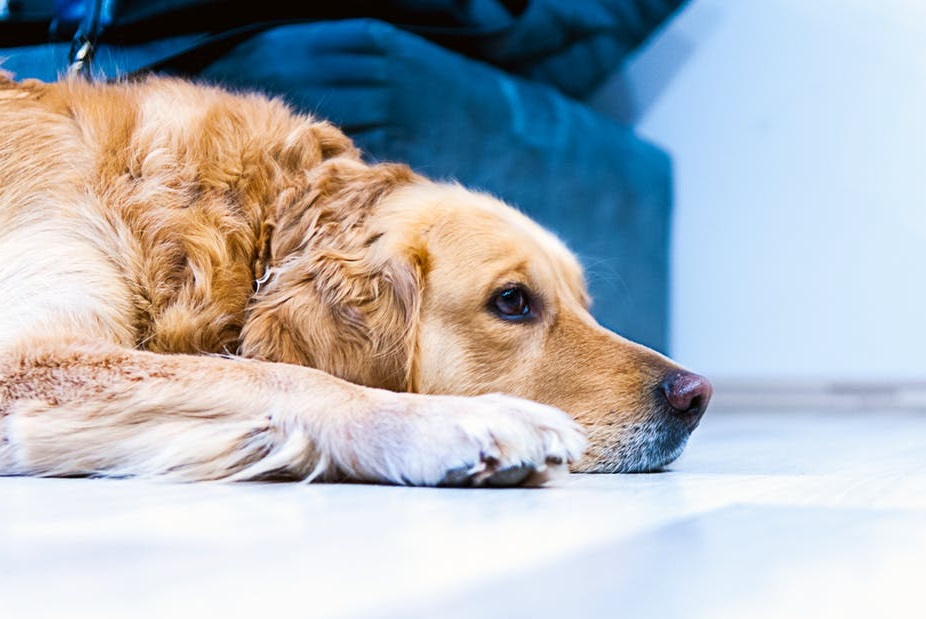 Demodectic mange, or demodicosis or red mange, is caused by the Demodex species of mite, of which there are three: Demodex canis, D. gatoi and D. injai, with D. canis being the common, reports Mar Vista Animal Hospital. Mange-in-dogs reports, “Veterinarians say that this disease is most common in puppies aged 3 to 9 months old.”

Puppies pick up those mites from their mothers; for normal, healthy pups, these mites don’t present much of a problem. But for dogs with health concerns, such as a suppressed immune system, the mites can cause considerable damage. There are various other theories as to why puppies are more susceptible to the disease. Other reasons may include heredity, moving from one living area to another, environmental changes or alterations to hygienic practices, writes Mange-in-dogs.

Though not as serious as the sarcoptic variety, demodectic mange still requires diligent veterinary care. In these cases, the younger the dog, the better because the chances of complete mite elimination increases. Adults that contract demodectic mites often have underlying health conditions, such as a suppressed immune system, cancer, liver disease or kidney disease, that require their own care. Like sarcoptic mange, treating demodectic mange includes medication, clipping back a dog’s hair and medicated dips.

Mar Vista Animal Hospital also recommends these basic steps as precautions against demodectic mange, which include reducing a dog’s stress: 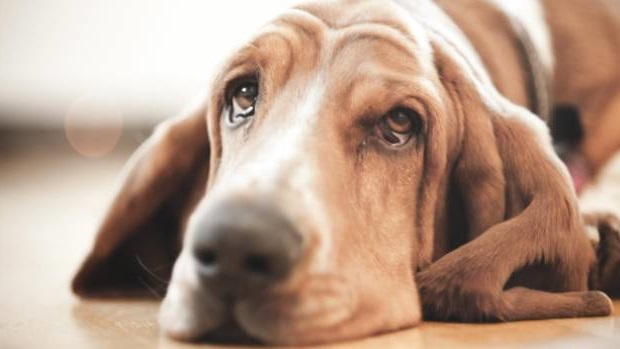 That’s because the cheyletiella mites actually walk around on the animal’s surface and, therefore, dandruff flakes, often the result of dry, itchy skin caused by mange, appear to move. Additionally, these mites can live for a few days without a host and, because they are on the skin’s surface, can transfer to bedding or other hosts, including people in some cases, and both adult dogs and puppies. As with the other types of mange, it’s important to get dogs with signs of the disease to the veterinarian quickly for treatment, which depends on the severity of the case. Medications and dips will likely be prescribed, but preventive care in the first place can help immensely. A healthy immune system, hygienic environment, and high-quality diet all help a dog fight off illness and infestation.

Once a dog undergoes treatment for mange, it’s up to his parents to follow through on the doctor’s instructions and to keep up with re-scrapings, checkups, dips and medications. Remember: Mites can be elusive. Sometimes a dog can appear normal, but in reality still has a lurking mite infestation. In all cases—and it’s just a good idea anyway—practice good hygiene with your dogs. Keep them bathed, their bedding washed and their environment clean. A healthy diet and strong immune system further preventively combat mange.

This post was last updated on: Friday, July 23, 2021
SaveSavedRemoved 0
Previous

How to treat your dog’s Addison’s Disease

My name is MIchael Bergins and i study veterinary at Ohio State University. Veterinary is what we would call the ideal profession for anyone who loves animals and wants to deal with them. We are dealing with the health and care of your little roommates. Understanding the particular role your pet plays in your family, we are committed to being healthy and happy people! So you decided to add another member to your family. Welcome it, giving it your attention from the early stages of your life! Their care is in your hands! And remember ... Beyond and above all, they need your love!

My Dog Bit Me! What Should I Do Next?