How To Treat Your Dog’s Abscessed Tooth

If your dog has noticeable swelling below his eye and he’s been pawing at his nose, you might think he’s been stung by a bee or other insect. While that’s possible, these also happen to be two common symptoms of an abscessed tooth. 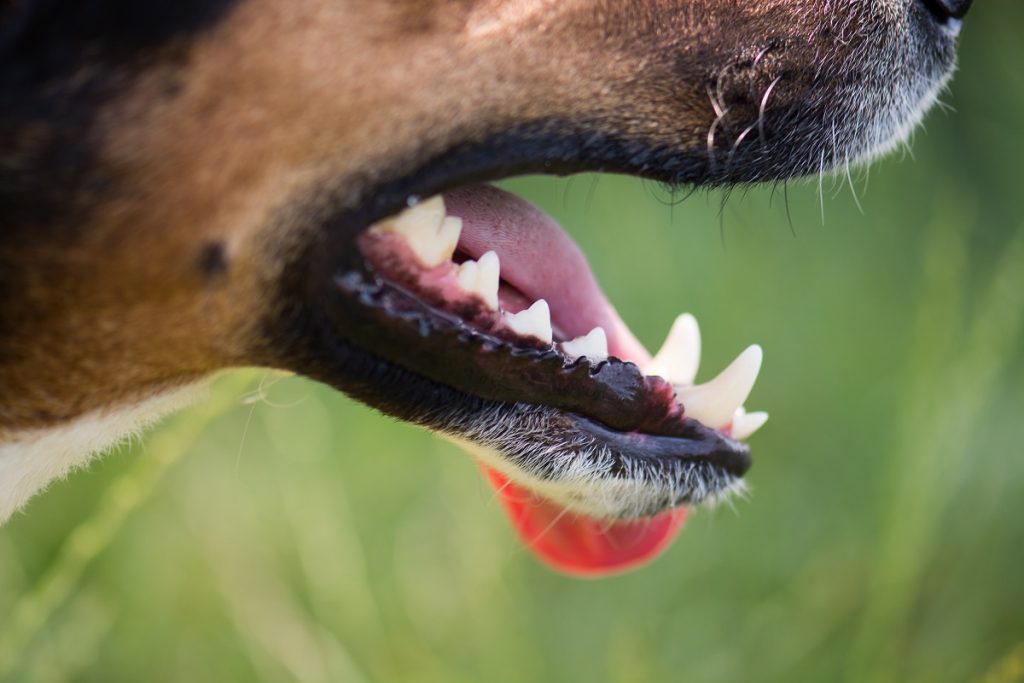 Like humans, dogs can suffer from abscesses, which are painful pus formations in the tissues surrounding a tooth.

What are the Symptoms of an Abscessed Tooth?

PetMD lists the following signs to watch for:

Pet parents “often confuse this condition with an eye infection, insect bite or puncture wound,” writes Race Foster. “They may consider it something that, if left alone, will heal on its own. The untreated abscess will, in fact, often spread to 1) the eye, causing a very serious and potentially blinding infection; or 2) other teeth, causing them to be lost also. This is fairly painful for the animal, especially when eating. In dogs that stay outdoors or those with long hair, it may remain unnoticed for a long period of time.”

In severe cases, webmd notes that an abscess can eventually break through your dog’s skin, and pus will drain over the side of his face.

What Causes an Abscessed Tooth?

According to petMD, periodontal disease may be a reason for the abscess. Dogs that frequently chew hard objects may also be more at risk to develop an abscessed tooth.

“If left untreated, facial or mouth traumas, bacterial infections and diabetes can all contribute to the formation of an abscess,” petMD adds.

Older dogs are more susceptible to abscesses in their fourth premolar, which is also called the carnassial tooth. This tooth, located about halfway back on their upper jaw, is much larger than the other teeth.

“In wild canines, it is the main tooth used to break up or crush hard material in their diet, such as bones or large pieces of meat,” Foster writes. “Today’s canine diets, even the all-dry ones, really do not require this big ‘work horse’ tooth for the animal to adequately break up his food before swallowing. Still, it is there, and it poses some unique problems for the older dog.”

How is an Abscessed Tooth Diagnosed?

Your vet will examine your dog’s teeth and gums, and probably take an X-ray.

“Blood tests, on the other hand, can be used to determine if the abscess is caused by a more serious underlying medical condition,” according to petMD.

How is an Abscessed Tooth Treated?

In the past, the only way to treat an abscessed tooth was to pull it. But today there are more options available for pet parents.

Usually the fluid is drained around the tooth to get rid of the infection, petMD.com notes.

If the tooth needs to be pulled, it is done so while your dog is anesthetized, and the tooth cavity is also cleaned and drained. Afterward, you can place cold packs on your dog’s mouth and give him antibiotics to help reduce the inflammation, along with pain medication to relieve his discomfort. You may also need to rinse your dog’s mouth with a chlorhexidine mouthwash.

To prevent infection, you should limit your dog’s chewing and avoid feeding him hard, crunchy foods.

About a week after the extraction, your vet will likely perform a follow-up exam to ensure your dog is healing properly.

The carnassial tooth is difficult to remove correctly, Foster notes. It must be split in half so all the roots can be removed along with the tooth. If any portion of a root remains, the abscess may reoccur.

Fortunately, carnassial abscesses can now be treated with a procedure that is like a root canal. “This can be fairly expensive, but it does save the tooth,” Foster writes.

How Can I Prevent an Abscessed Tooth?

Not only can brushing your dog’s teeth help prevent heart disease, it can help prevent your dog from developing an abscess.

“Limiting the amount of chewing on hard toys or objects or pulling on the dog’s teeth (through tugging) will also help reduce the likelihood of an abscess,” petMD.com adds.

This post was last updated on: Sunday, July 18, 2021
SaveSavedRemoved 0
Previous

How to Treat Your Dog’s Tonsillitis

My name is MIchael Bergins and i study veterinary at Ohio State University. Veterinary is what we would call the ideal profession for anyone who loves animals and wants to deal with them. We are dealing with the health and care of your little roommates. Understanding the particular role your pet plays in your family, we are committed to being healthy and happy people! So you decided to add another member to your family. Welcome it, giving it your attention from the early stages of your life! Their care is in your hands! And remember ... Beyond and above all, they need your love!

My Dog Bit Me! What Should I Do Next?