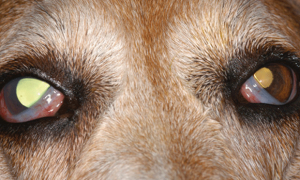 Glaucoma is a condition caused by abnormally high intraocular pressure (IOP) in a dog’s eye. When left untreated, a dog can potentially lose some or all of his vision. “Inside the normal eye there is constant production and drainage of a watery fluid called aqueous humor,” reports Petplace. “When there is a problem with the drainage of the fluid, the pressure within the eye can increase. High pressure causes damage to the optic nerve, which, in turn, causes vision loss.”

Hope Center reports that high elevation in the IOP can cause irreversible damage to the retina and optic nerve in just 24 to 48 hours. “As a result, glaucoma is considered an emergency and requires immediate treatment if vision is to be maintained.” There are two types of glaucoma, primary and secondary. The causes and treatments of glaucoma differ depending on which kind of glaucoma has been diagnosed. So what are the differences?

What’s known as primary glaucoma is an inherited condition and not caused by outside trauma to the eye. The condition “occurs in an animal because it possesses physical or physiolgic traits that predispose the animal to glaucoma,” reports Pet Education.. “This is usually predetermined by genetics. For instance, eyes may have drainage pores that are too small or naturally narrow angles such that the fluid has a difficult time making its way out of the globe.” With primary glaucoma, the condition typically progresses to both eyes, although, as Pet Education points out, “both eyes are rarely affected equally or at the same time. The disease usually occurs in one eye months or even years in before it affects the second one.”

Primary glaucoma most commonly affects dogs aged 3 to 7, but it can occur at any age, reports Hope Center. It can show up in any breed but is most frequently associated with Cocker Spaniels, Poodles, Beagles, Chow-Chows, Bassett Hounds, Dalmatians and many terriers.

Secondary glaucoma, simply enough, refers to the fact that the disease is caused by, or secondary to, another condition. “A common example is a penetrating wound to the eye,” writes Pet Education on its site. “This often causes inflammation and the fluid may become too thick to flow out through the drainage pores or it might cause scar tissue to form with the drainage angle, itself, closing.”

According to AnimalEyeCare and Pet Education, a list of other possible causes of secondary glaucoma includes:

How Do You Know if Your Dog Has Glaucoma?

The sooner glaucoma is diagnosed, the better but there is one problem: It can be difficult to detect, especially in its early stages. Because dogs cannot tell people when they’re experiencing the vision impairment or pain often associated with glaucoma, the condition can go undetected for long periods of time.

Some things to try and keep a lookout for include:

If you suspect that your dog has any sort of eye trouble, including glaucoma, it’s important to take him to your veterinarian right away to prevent the condition and/or pain from worsening. It is quite likely that your regular veterinary may choose to refer you and your dog to a veterinary ophthalmologist, who can start running tests, which, according to VetInfo, may include the following:

Once a veterinarian has determined whether or not your dog has glaucoma, a course of treatment can be prescribed. Because the disease is painful and progressive, it’s important to start treatment right away. Pet Education. writes on its website that glaucoma treatment depends on its cause and severity, but the main goals are reducing pressure in the eye, reducing the amount of aqueous humor that is produced, increasing drainage and providing pain relief (if needed). 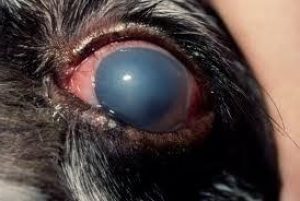 Generally, veterinarians prescribe medications to help achieve these goals. “Most of the therapies are used topically (e.g., ointment in the eye), but some are also given orally. Those given topically often have to be administered three or more times a day,” writes Pet Education. Surgery is another treatment option, particularly in the cases of advanced glaucoma. “The surgical procedures that are available are also meant to decrease the pressure in the eye,” reports Suite101.

“A laser cyclophotocoagulation is done by destroying part of the eye that produces the aqueous humor. This procedure may help to save the eye if the patient can still see. If the patient is blind and the eye is painful then the eye can be surgically removed (enucleation). During the enucleation the bad eye is removed and the skin sewn shut. The fur will then grow back over where the eye used to be.”

Implants can be inserted during the surgery if the pet parent would like the appearance of an eye. The most important thing is that a dog’s pain and symptoms are relieved immediately. Even if a dog’s vision or eyes cannot be saved despite treatment, dogs can adjust remarkably well to blindness, especially when shown guidance and compassion while adjusting. There is no reason a blind dog cannot continue to live a long, otherwise healthy life with his family. 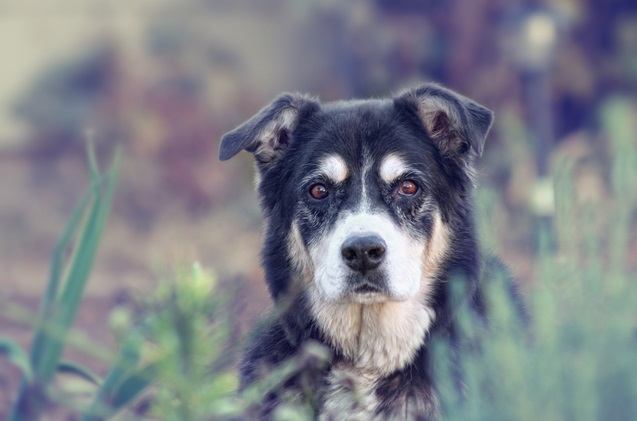